Completed in 2004, the Maria Theotokos Shrine is a work of contemporary architecture immersed in the surrounding landscape, distinguished by the large green roof of aged copper and the rough material of exposed stone. Theotókos (in Greek Θεοτόκος) is a title of the Virgin Mary, which literally means “she who generates God” or “she who gave life to God” and is often rendered in Italian as “Mother of God.”

Times of celebrations from 1 September 2020 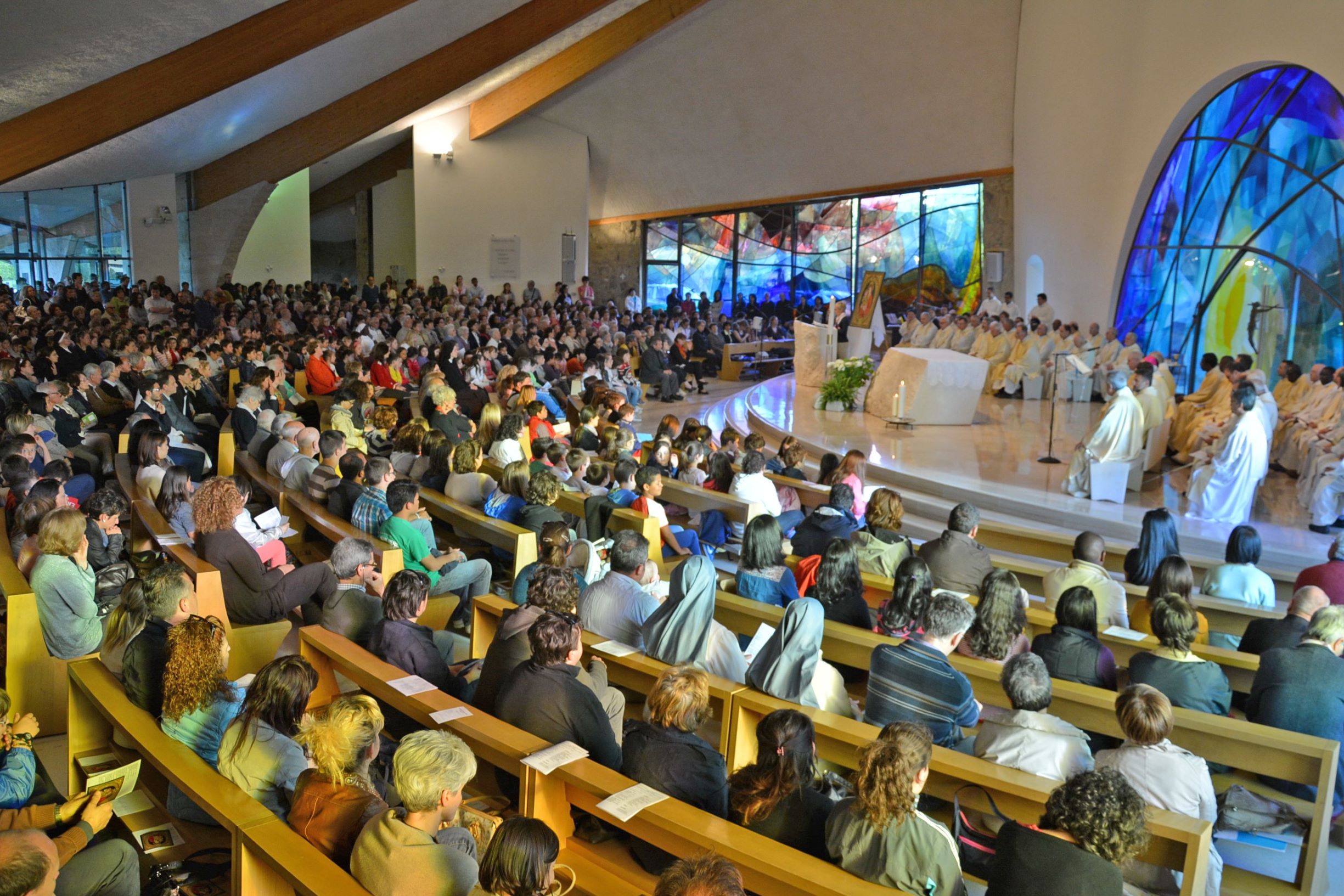 The Shrine was built by members of the architecture, sculpture and painting studio “Centro Ave Arte”, and was born from the collaboration of five artists: the sculptress Ave Cerquetti who is also the creator; the architects Elena Di Taranto and Patrizia Taranto, the sculptress Erika Ivacson and the painter Dina Figueiredo, coordinated by the architect, Vita Zanolini. 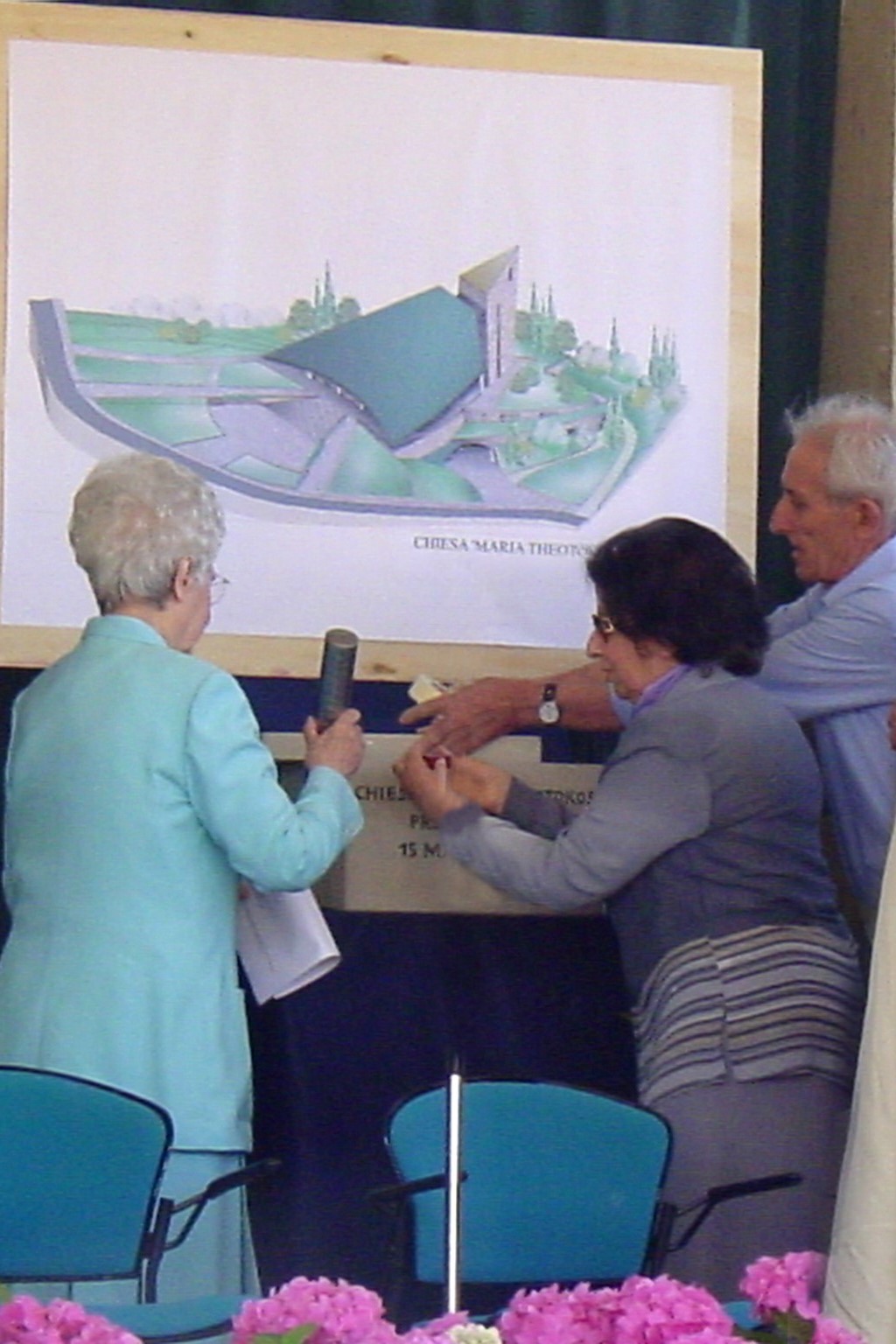 Ave Cerquetti recalls that Chiara Lubich commissioned the church after a conversation with the then bishop of the Diocese of Fiesole, Bishop Luciano Giovannetti: “Chiara asked us to think of how to express her greatness as Mother of God who brings the divine to earth as a heavenly inclined plane that, from the dizzying height of the heavens, descends to the infinite smallness of creatures. Thus was born the idea of this blue-green roof like the sky, a wide inclined plane that rises from the ground, firm and constant, to the top of the building, crowned by the bell tower. The latter, covered by a golden triangular panel, with its clear and pure form, constitutes an explicit reference to the Trinity.”

It was May 1986 when Chiara Lubich, returning from a trip in which she had visited various Marian shrines where she had intensely experienced Mary’s presence, for the first time expressed her desire to make Loppiano a “shrine”, a “city of Mary”: “We build, not with stones but with people, a shrine to Mary; we are going along the “Way of Mary” in order to become a little Mary, so that those who come here breathe her atmosphere, like pilgrims who go looking for her and find her not in the stones or walls, but in the people.” Thirteen years later, on January 4, 1999, Chiara, together with a group of inhabitants of Loppiano, placed a Marian medal in the area where the Shrine stands today: “Our church will be built here, but it will be built when Providence sends us the money destined precisely for this purpose.” And things, with a certain speed, went just like that. The church was built thanks to the donations of the faithful and with the contribution of the Italian Episcopal Conference. The foundation stone was laid on May 15, 2003, in the presence of Chiara Lubich and on the occasion of the 40th anniversary of the foundation of the little city, October 29, 2004, the building was dedicated to Maria Theotokos. The following day, with the first Mass, the remains of the servant of God, Renata Borlone, were transferred to the chapel of the Blessed Sacrament. On November 1, 2004, Bishop Luciano Giovannetti proclaimed the church a “Marian Shrine”, inviting “all the faithful and the numerous pilgrims who will flock there to experience Mary’s maternal intercession.” Since then, it has been a point of reference for the inhabitants of the little city, the diocese of Fiesole, for those who, from the surrounding area, have made it the place of a profound experience of immersion in their faith, and for those who come from all over the world to visit it.

The central entrance is characterized by a large bronze door representing “Mary, Gate of Heaven.” It depicts Our Lady who, on the nothingness of herself, allowed God to speak. It is the work of Maria Cristina Criscola. 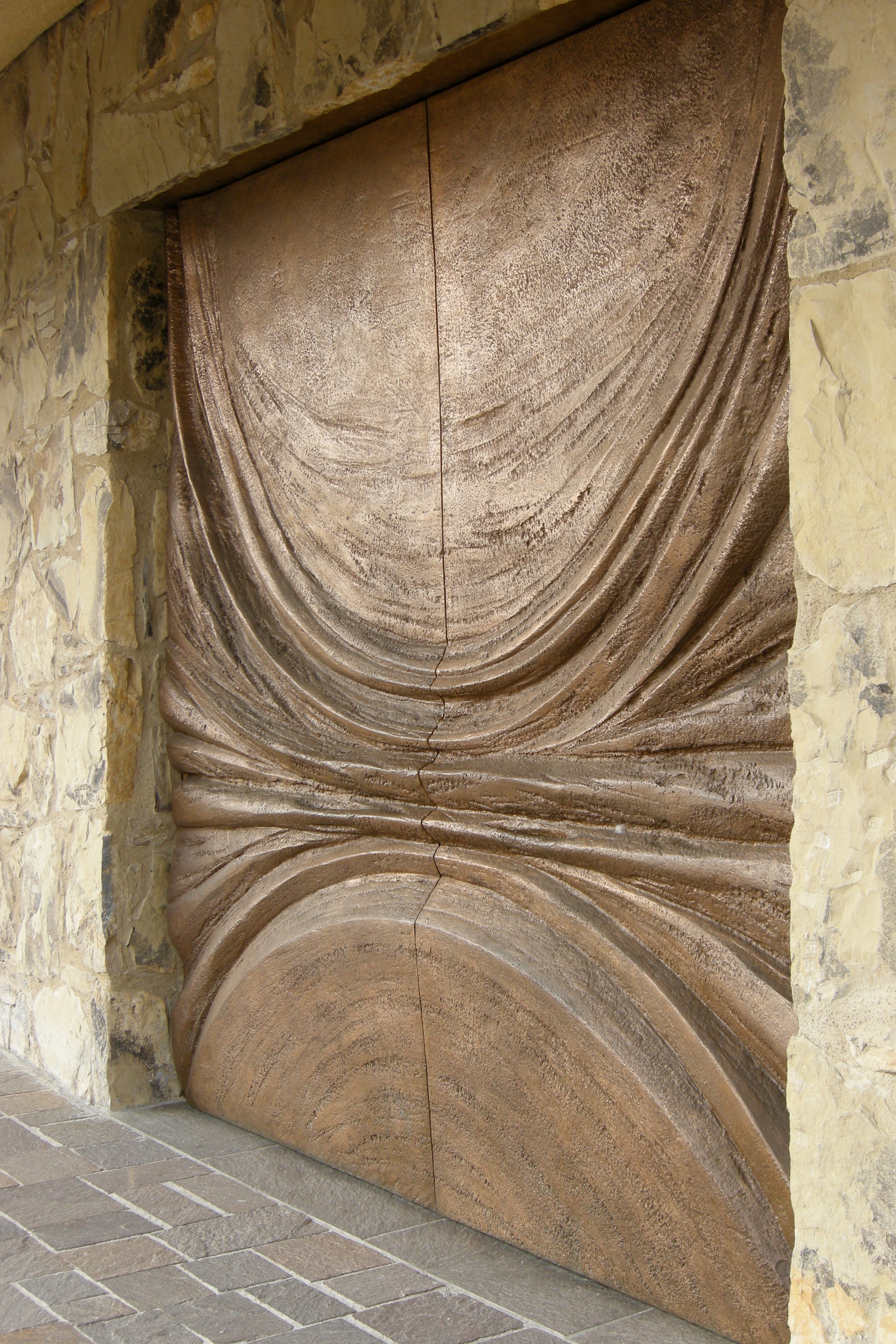 The baptistery is located on the left side of the church, in spatial and acoustic communication with the assembly. Next to it is the penitential area with six confessionals. 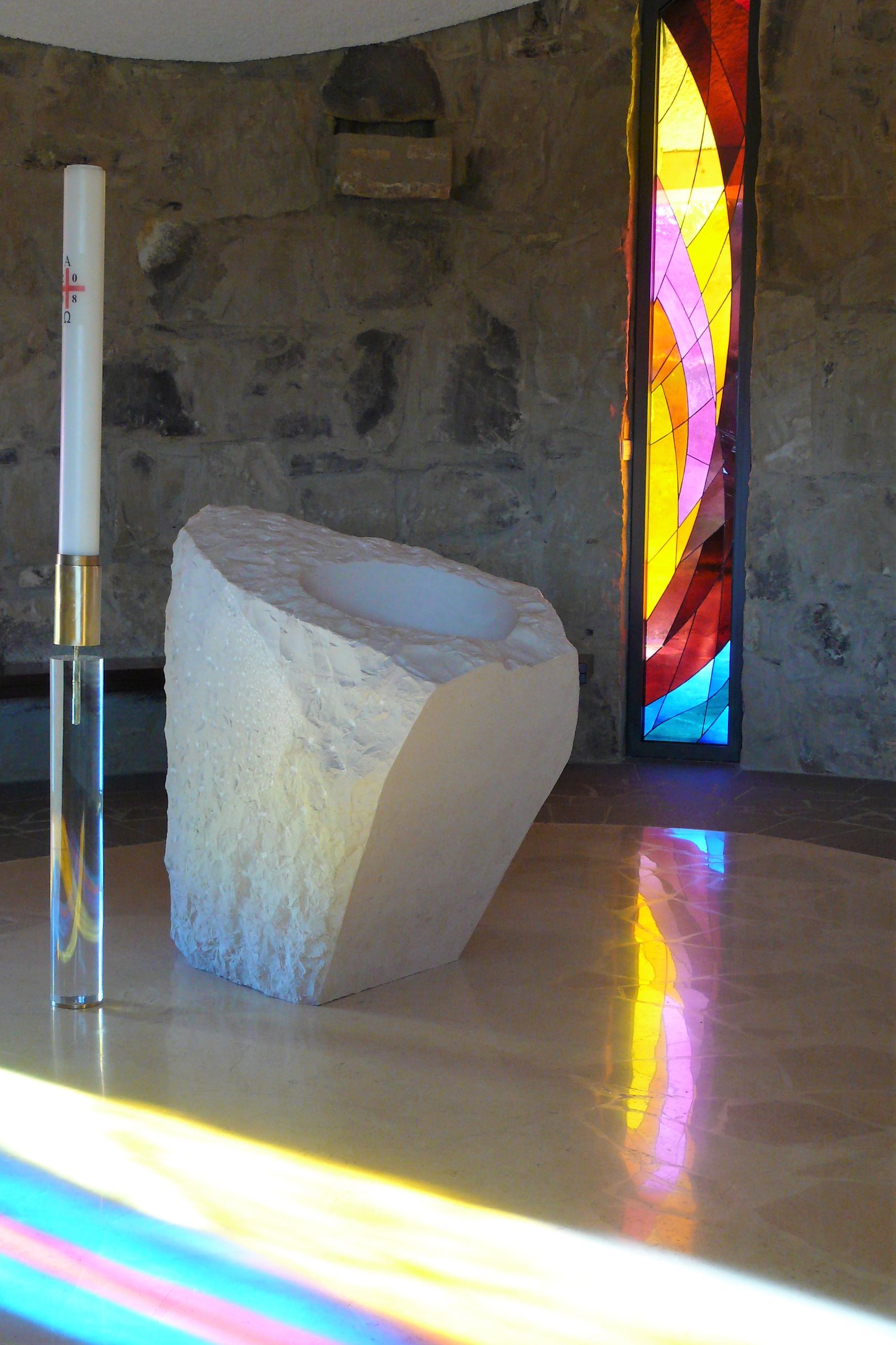 Along the sides of the Church, large windows illuminate the spaces of the Shrine with the strength of its colours and the continuity of their lines. They are the work of the painter, Dina Figueiredo. 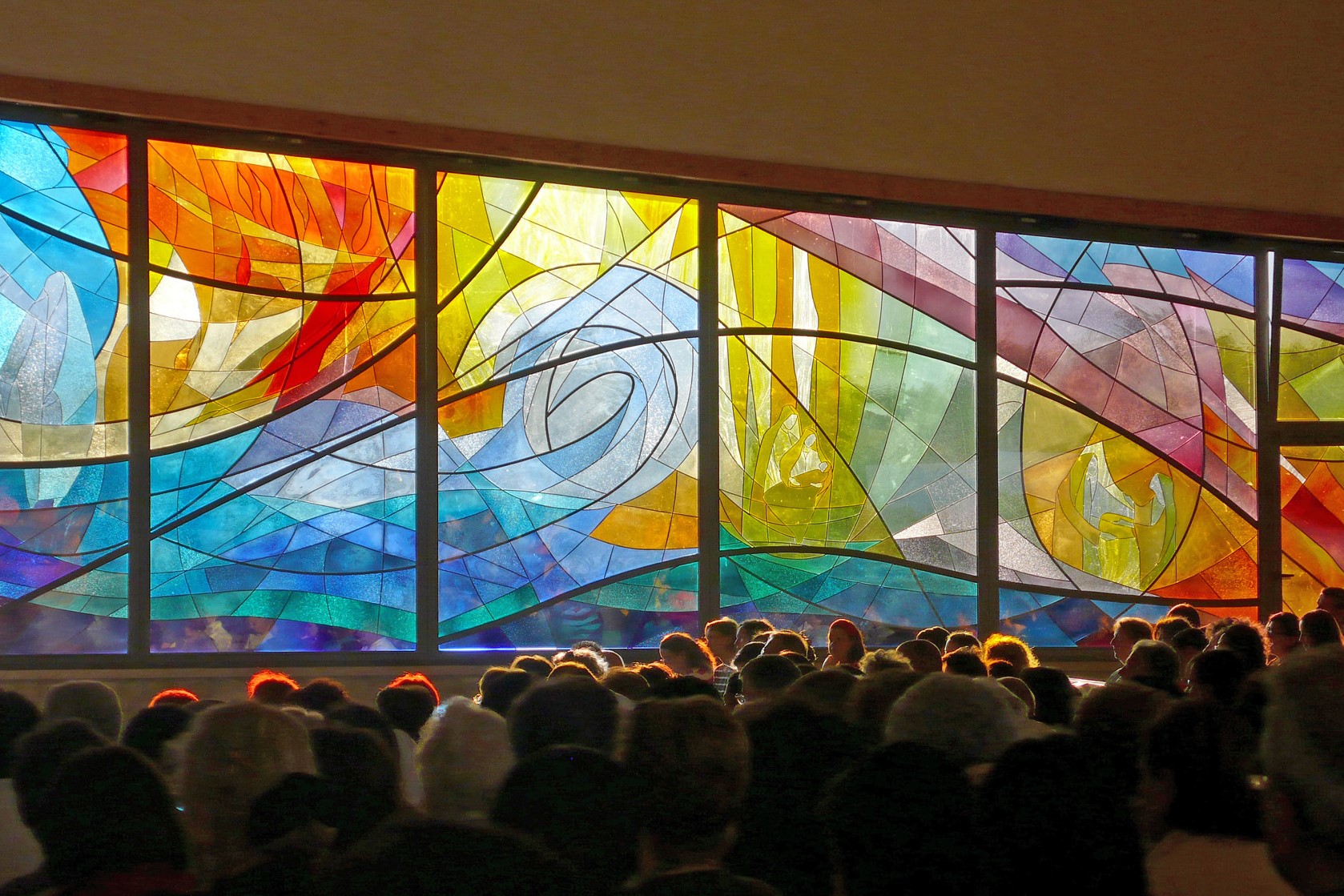 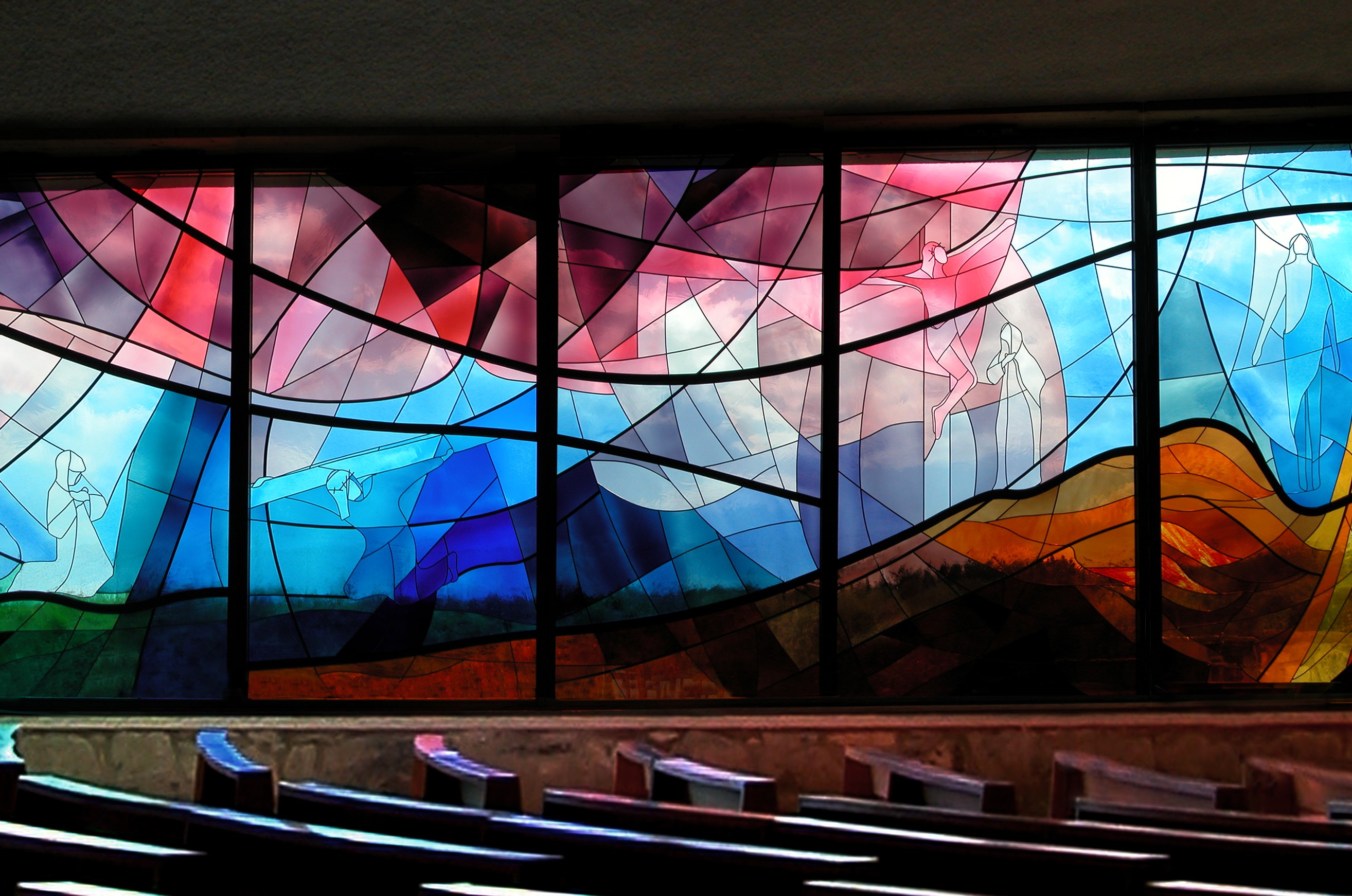 The mystery of the Passion of Jesus is depicted on the left side. The first painting recounts an episode taken from the Gospel of John. It is Holy Thursday, when Jesus, walking down the stairs from Jerusalem to the Cedron, at the foot of the Mount of Olives, says His prayer to the Father for unity: “that they may all be one” (Jn 17:21). This is followed by the representation of Jesus’ falls as he climbs Mount Calvary: the top part depicts the expressive power of the colors of martyrdom with purple pink, scarlet red and violet; at the bottom, the shades of a dark blue convey the intensity and rawness of the hours spent under the weight of the cross. In the center of the scene, the light, the fruit of suffering loved, breaks into a horizontal and ascending movement that crosses the crucifixion where the pain of the Mother, Mary Desolate, is one with that of her Son, Jesus, abandoned by the Father. In the last section of the picture, the whole earth participates in the glorious mystery of the Resurrection: Jesus rises in the luminous glow of Heaven.

On the right side, the stained glass window invites one to meditate on the most important stages of Mary’s life, the model of every Christian: the Annunciation, the Visitation, the birth of Jesus, Mary, the living Word, Pentecost, the Assumption.

«The Mother of God embraced, like a huge blue sky, the sun itself, God himself. God loved her so much as to make her his mother and his love made him become small before her!»

The presbytery is characterized by a large stained-glass window in blue tones representing Mary, Mother of God.The many celestial blue shades of glass in the sky fade towards the golden heart in the center which reveals the tabernacle of the Blessed Sacrament Chapel behind it. 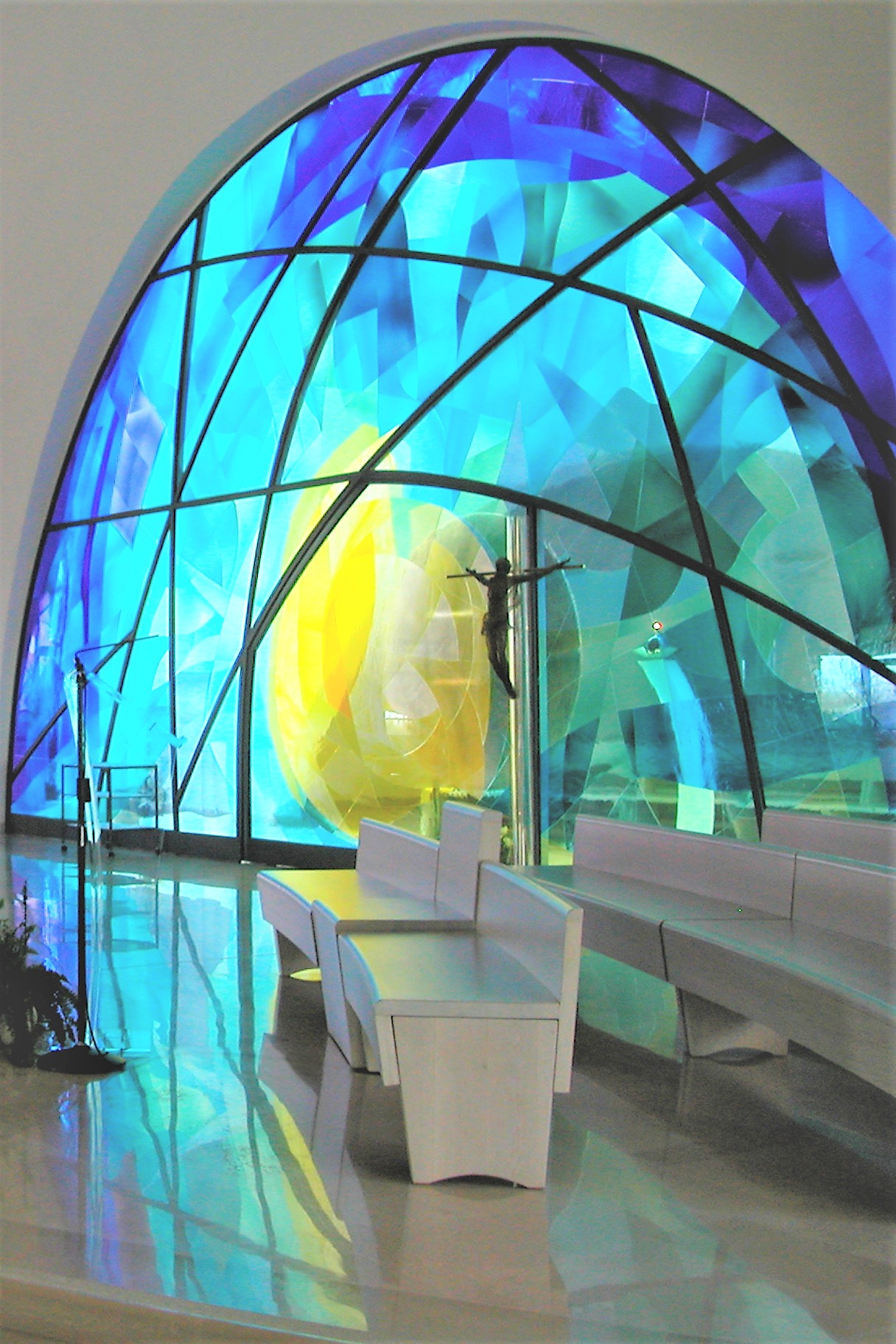 The tabernacle and the chapel

Scanning the central part of the stained-glass window, one discovers the tabernacle, contained in the large gilded bronze sculpture by Ave Cerquetti, on the side facing the assembly, and by the sculptress Fiamma Han, on the side facing the Chapel of the Blessed Sacrament. The chapel is illuminated by a large blade of light, a “split” that both separates yet unites the church and bell tower. The symbolic representation of the space refers to the mystery of Jesus crucified and abandoned, who redeemed us by bringing us from darkness to the total light of God. Even at night this space, illuminated by the presence of the tabernacle, is the brightest point of the Church. Here, the “foundation stone” of the building was placed on May 15, 2003 and it is also the place where the remains of the Servant of God, Renata Borlone, are to be found. Renata was co-director of the little city for many years. 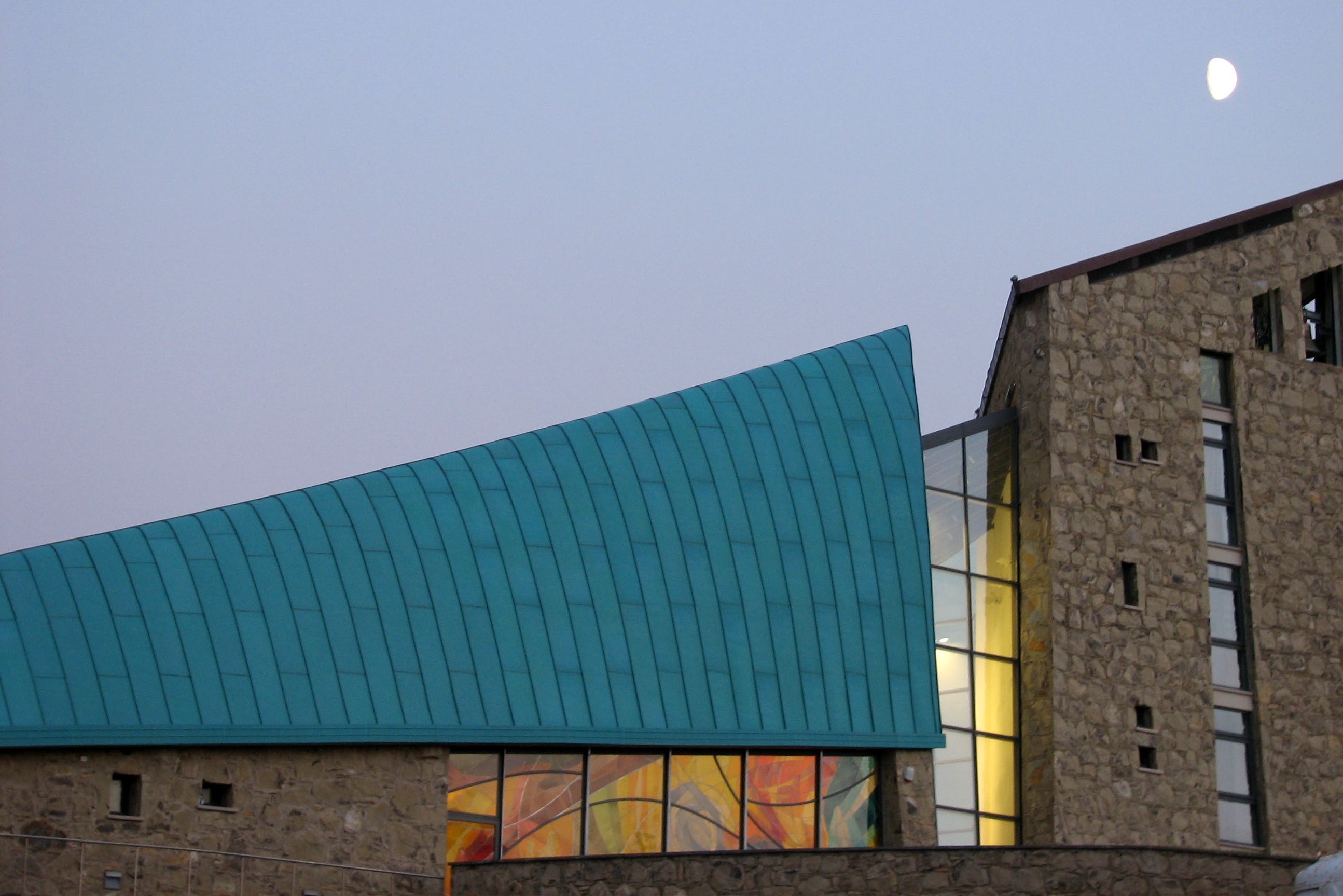 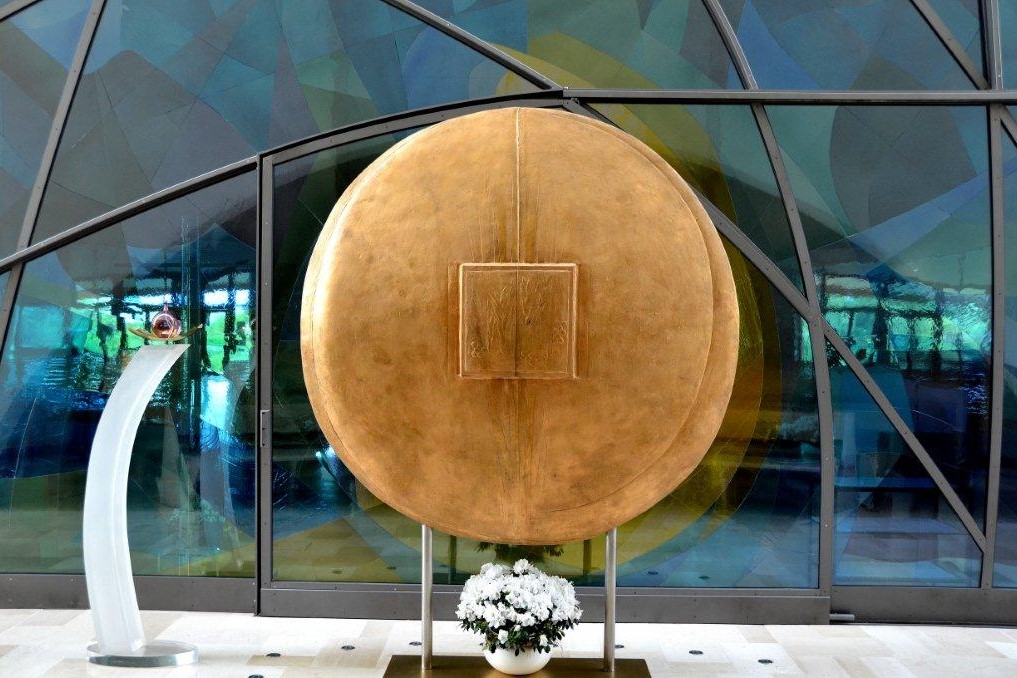 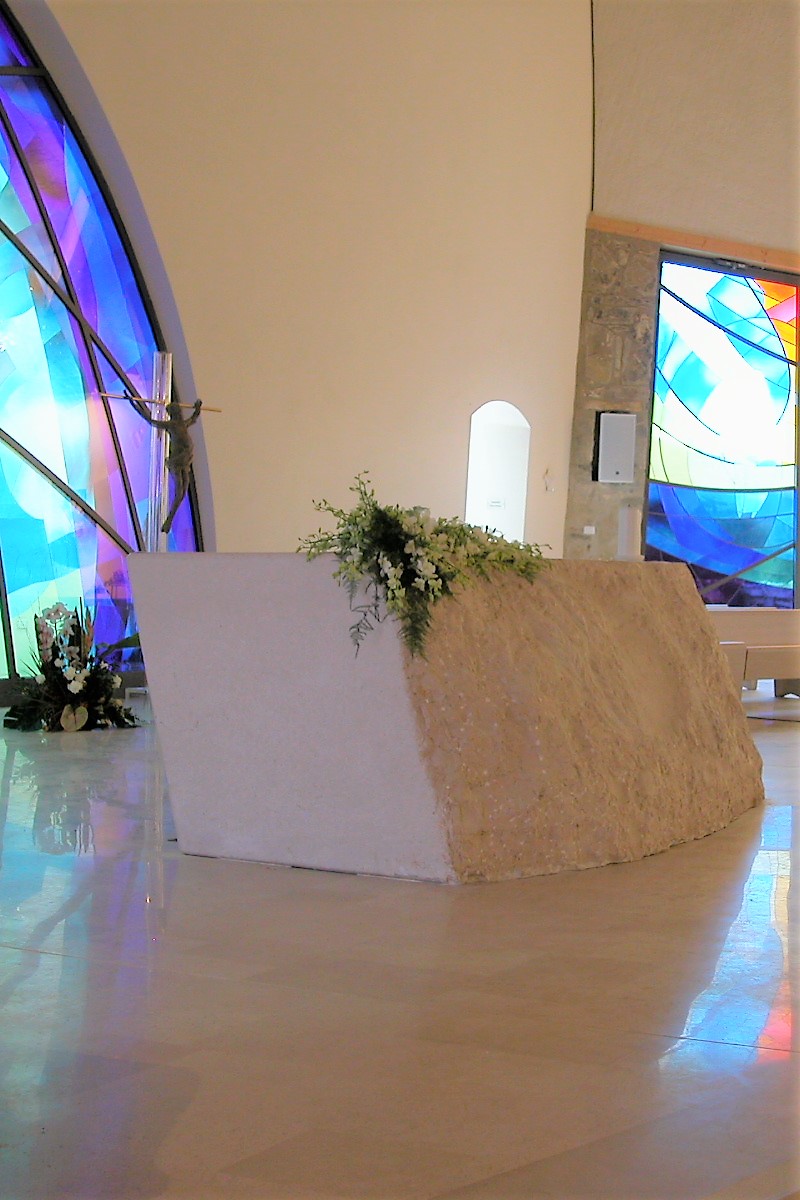 The altar is made of a single block of Trani stone (limestone) designed by the sculptress Erika Ivacson: the solemnity of the shape, with sloping cuts that harmonize with the architecture, recalls both altar and dining table and represents the place of the Sacrifice. On the front, in bare rock, carved and polished, the Eucharist with stylized suggestions of the symbols of wheat and grapes. The relics of St. Clare of Assisi, St. Romolo, patron saint of Figline and Incisa Valdarno, and St. Giovanni Gualberto, founder of the Vallombrosa Benedictine Congregation, have been placed in this altar. The lectern, also carved in a single block of Trani stone, recalls the “cornerstone”, symbol of the Word of God, the foundation of the spiritual life of the Christian. Also carved in the rock are the words Alpha and Omega, depicting the beginning and the end: the Word.

On a large wall hangs a precious painting of Mary and Child by the Indian artist Kalaichelvan of the Hindu religion. It is a gift from Dr. Shri B. Krishnaraj Vanavarayar and family to Chiara Lubich. This depiction of Mary’s presence in the Shrine is a tangible sign of the love of the brothers and sisters of other religions who adhere to the Focolare Movement. This picture was blessed by Pope John Paul II on September 26, 2004 at Castel Gandolfo. Here, Pope Francis paused in prayer on May 10, 2018, before meeting the members of the little city. 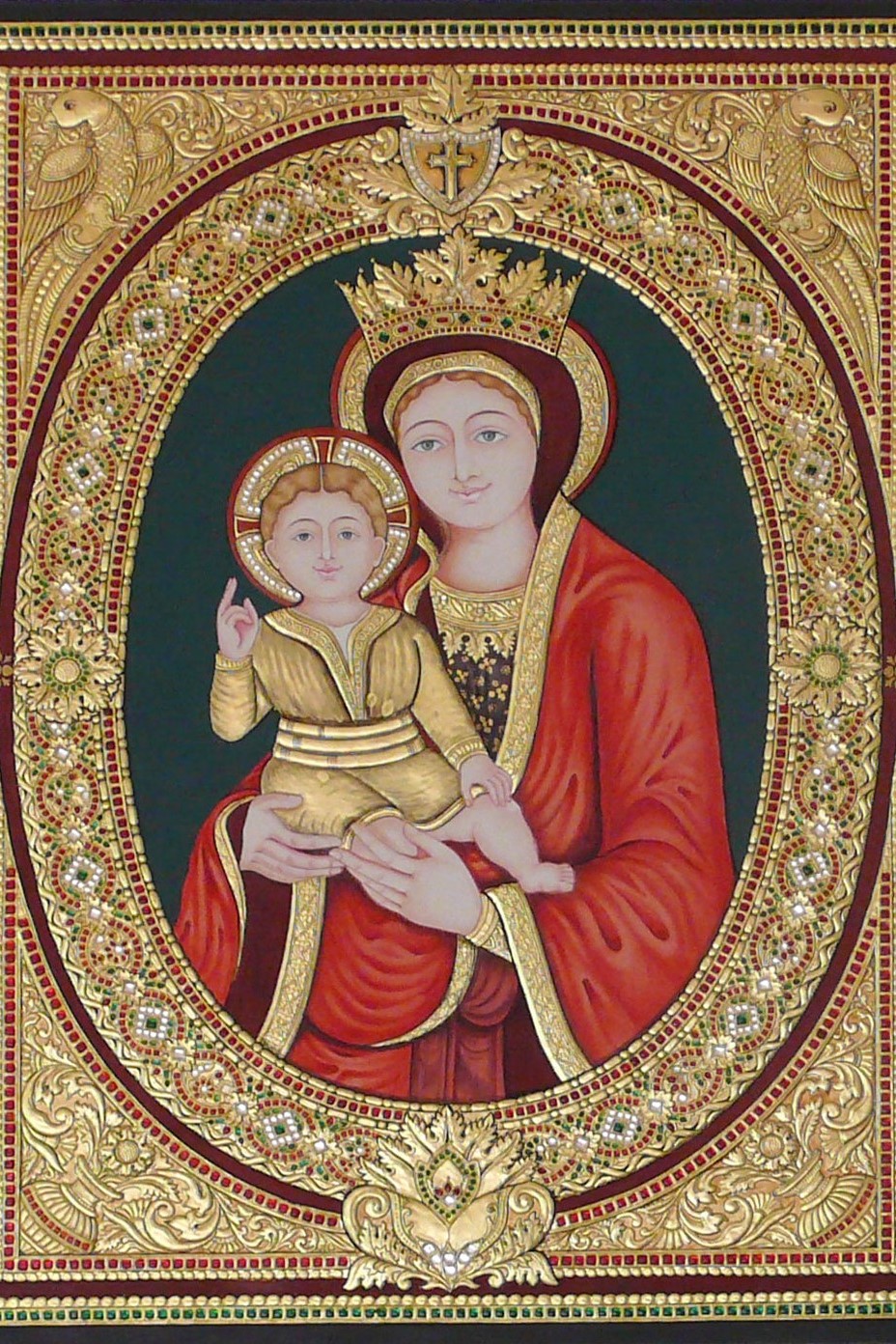 Many couples and families, also non-Italians, choose Maria Theotokos Shrine as a meaningful place to celebrate their marriage, the baptism of their children, or anniversaries and special occasions. 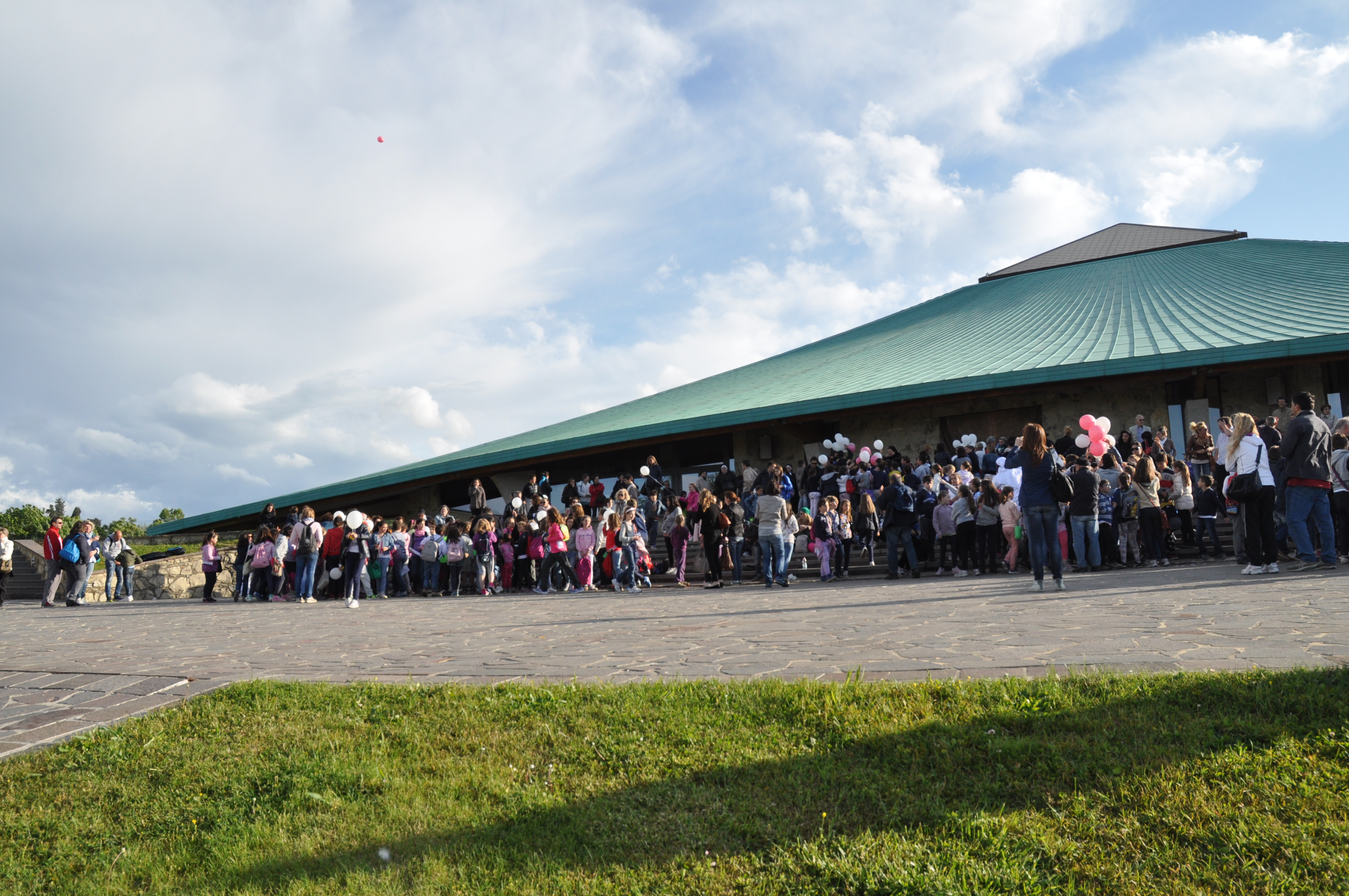