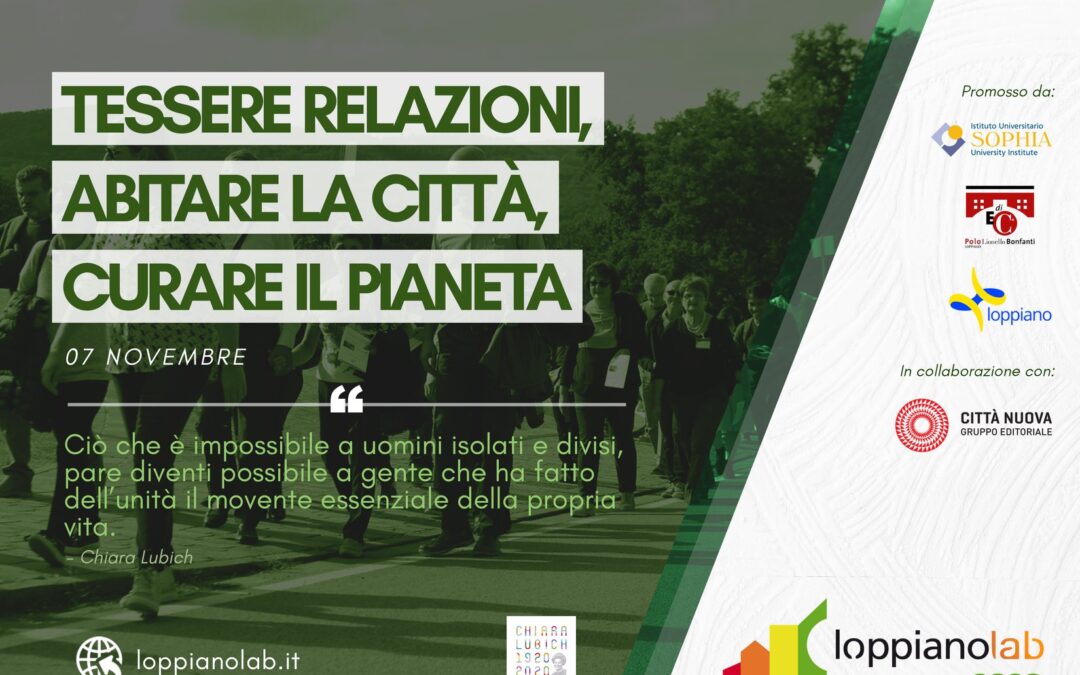 Cities, the pandemic, the economic crisis, political choices, protests in the streets: Loppianolab, in its third and last online event in 2020, puts the city at the center of the workshop. It was a significant reality in the life, thought and work of Chiara Lubich, founder of the Focolare Movement, and whose birth centenary occurs this year.

The cities are at the center of the third and last event of Loppianolab 2020. Cities, crossroads of resources, its wounds and challenges, mirror of those issues that run through our globalized world and that the pandemic has highlighted even more such as social unease, unfair economy, ecological crisis.

Chiara Lubich, founder of the Focolare Movement and whose birth centenary takes place this year, had a real passion for cities.  She saw them as potential places where she could promote positive experiences of fraternity that could then be shared online and multiplied in larger dimensions. “What is impossible for millions of isolated and divided men, it seems, becomes possible for people who have made mutual love, mutual understanding, unity, the essential motive of their lives,” Chiara Lubich said on December 17, 1996, in front of the audience of UNESCO, gathered at the ceremony of the Award for Education for Peace. Exchanging love, mutual understanding, unity, values that, if brought into the life of the city, can make one glimpse a specific design and vocation for each city, with a history and a future of hope. For this commitment, Lubich was awarded 19 honorary citizenships, considered by her as recognition of “a charism that has generated, at every latitude of the world, an experience and a culture based on unity, a profound need in the history of humanity”, (2004, Address to Parliament – London).

On Saturday, November 7, at 3.30 pm, Loppianolab will be back with the third webinar dedicated to Chiara Lubich’s birth centenary, entitled, “Weaving relationships, living in the city, taking care of the Planet”, transmitted live through Zoom and YouTube from the Auditorium of the International Little City of Loppiano (Fi), an example of a city, an expression of the culture of unity where its citizens try to live daily according to the Gospel law of mutual love.  There are 25 Focolare little cities in the world.

At 10: a.m. the event will be preceded, by the webinar entitled “Young people of The Economy of Francis: signs of fraternity and proposals for a new economy”, with: the young protagonists of The Economy of Francis (EoF); the economist Luigino Bruni; Maria Gaglione and Francesca Giglio from the organizing committee. The meeting will be transmitted live from the Lionello Bonfanti Industrial Park, one of the “hubs” of EoF, from November 19 to 21,2020.

Loppianolab is a participatory workshop that has been taking place since 2010 in Loppiano (Fi), Focolare International Little City, and deals with current political, economic, cultural and social issues of the country. It is promoted by Sophia University Institute, the Lionello Bonfanti Industrial Park, the International Town of Loppiano itself, in collaboration with the Città Nuova Publishing House.