On Sunday, February 7, the General Assembly of the Focolare concluded with a document inviting members of the Movement around the world to make themselves close to “those who do not count or who live in disadvantaged conditions.”

Beginning from “Listening to the cry of humanity, of creation and of the new generations” and from “the embrace of every kind of suffering and disunity” we have the starting point for the orientations that have been developed by the General Assembly of the Focolare Movement, for the next 6 years. In fact, the final document which was produced by the Assembly and approved in today’s final session has as its title: “A road map”.

It’s a document that begins with a message that is clear and strong: in line with their calling to take unity where there isn’t unity, the members of the Focolare Movement commit themselves first and foremost, “to seek out those who suffer, those who are excluded, beginning from those whom we ourselves have made suffer or have excluded” and “to be in dialogue with all men and women, to let ourselves be touched by the other, to have a preference for those whom we perceive as being more different from us”.

The action plans are born from the desire to live even more in closeness with “those who don’t matter, those who live in underprivileged situations or suffer systematically” and they are a call to all the adherents of the Focolare to adopt a style of life which is humble, moderate and with commitment in every environment. Our desire is “to act more as ‘living networks’, that are enriched with relationships of trust and to collaborate with anyone who is involved in working for the same goals.”   A priority of our focus will be the reality of the family, “as the first cell of society”; it should be “favored and valued in its actions as a social and political subject”.

With “deep sorrow” the General Assembly asks for forgiveness from the victims “of any abuse whether physical, sexual, of authority or of conscience”. And so as not to remain vague or unclear, the new President of the Focolare, Margaret Karram, together with the re- elected Copresident, Jesus Moran, has presented to the Assembly a program of actions containing 4 points. These go from the revision of the bodies and the processes of enquiry into abuse, to the re- examination of all abuse cases – of whatever kind – that have come or will come to our knowledge.

At the end of the Assembly. The new President Margaret Karram – supported by a world -wide, on line applause -expressed her gratitude to the former President, Maria Voce, for her commitment, her intelligence and the spiritual depth with which she has led the Movement in the last 12 years. And she encouraged everyone to remain constantly attentive to the voice of the Holy Spirit and to give witness to the joy that is born from living the Gospel with enthusiasm. 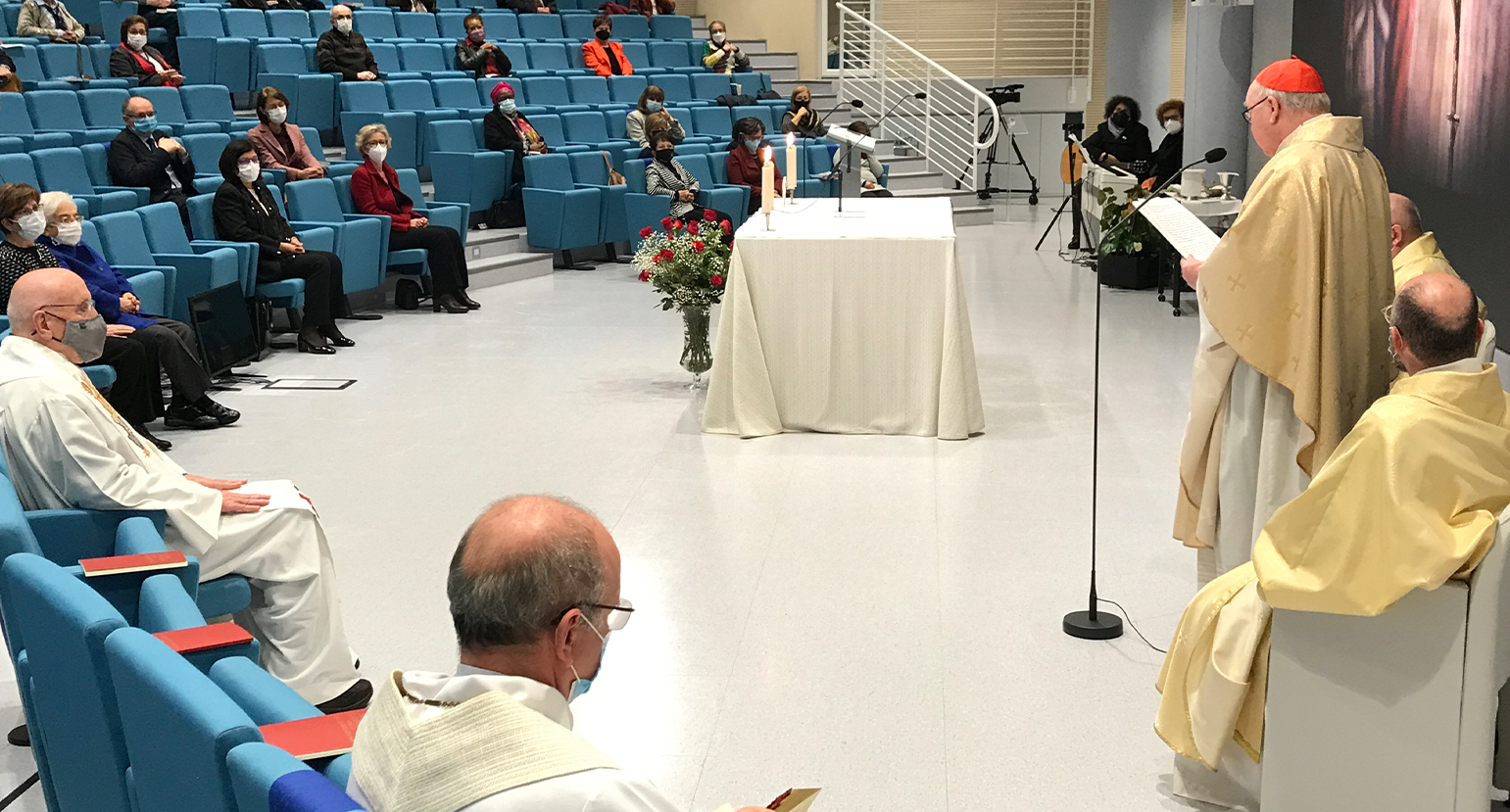 At the conclusion of the Assembly, Cardinal Kevin Farrell, prefect of the Dicastery for the Laity, the Family and Life, together with the Undersecretary Linda Ghisoni, came to visit the International Center of the Focolare at Rocca di Papa. In his homily during the Mass of thanksgiving, Cardinal Farrell reminded us of what Pope Francis recommended, in the private audience that was granted yesterday to the Assembly: “that moments of crisis, both personal and communitarian, if they are lived well and with discernment, can also be a gift and can bring great benefits. They re- dimension us, they knock down our pride, our futile self-security.” Pope Francis encouraged the Movement to “return continuously to the purity of Chiara Lubich’s charism, that is to turn to the beauty of a personal relationship with Jesus, that is sincere and total.”

The Pope at the General Assembly of the Focolare Movement: the aftermath of the founding, the importance of crises, coherence and realism in living spirituality.

Papa Francesco, sabato 6 febbraio, Pope Francis received in private audience the 362 participants of the General Assembly of the Focolare Movement, a representation of whom were present in the Paul VI Hall in the Vatican and with the majority connected via internet. Welcoming them, he extended his greetings to all members of the Focolare Movement. He encouraged them to remain faithful to the original source of their charism while remaining in dialogue with new social and cultural situations. 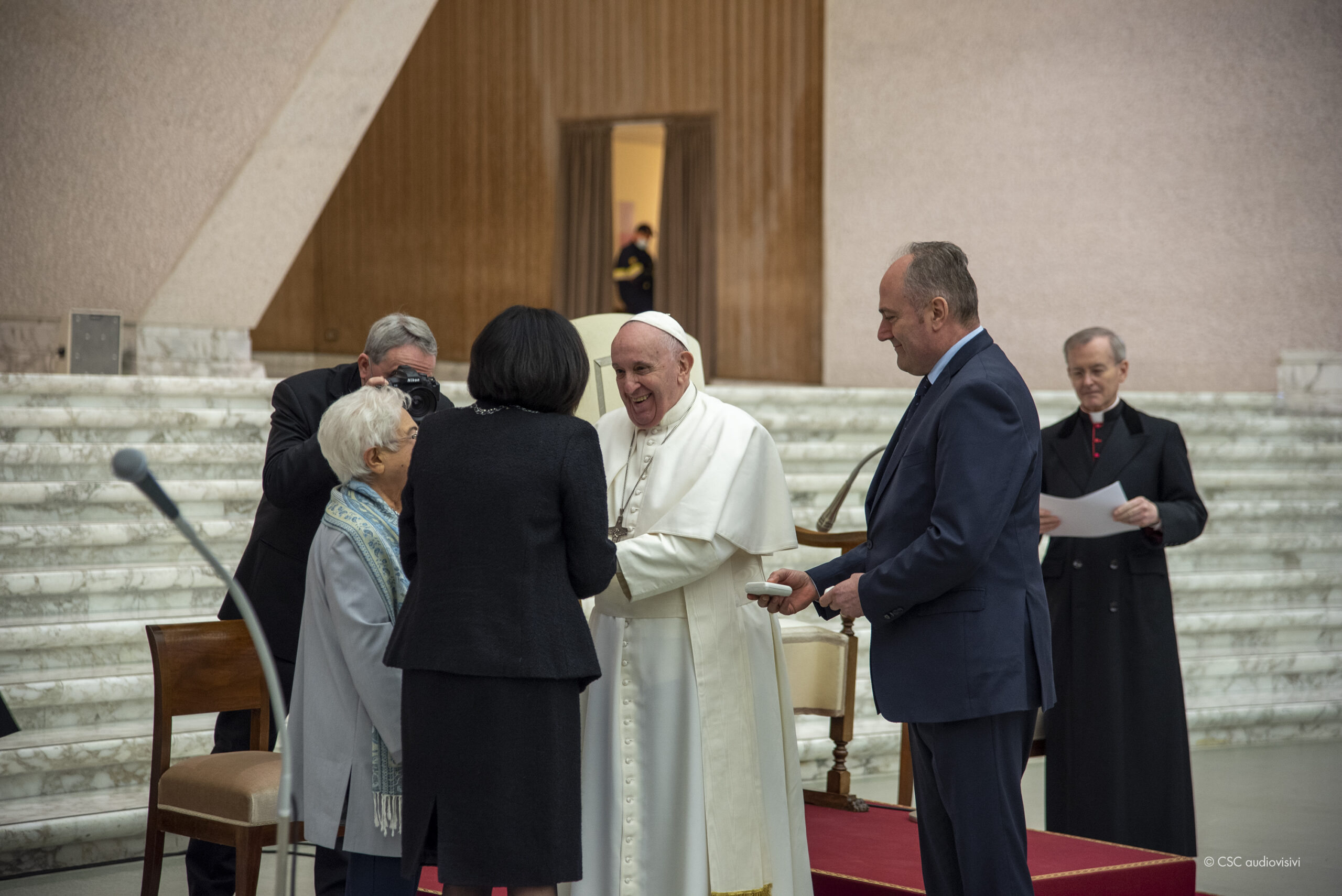 After the death of the founder – the Pope explained in his speech – the Movement is called to overcome the natural bewilderment and also a decrease in numbers. “Every charism is creative, it is not a statue in a museum, no, it is creative. It is a question of remaining faithful to the original source, striving to rethink it and express it in dialogue with the new social and cultural situations. It is firmly rooted, but the tree grows in dialogue with reality. This task of updating is all the more fruitful the more it is carried out by harmonizing creativity, wisdom, sensitivity to all and fidelity to the Church. Your spirituality, characterized by dialogue and openness to different cultural, social and religious contexts, can certainly encourage this process. Openness to others, whoever they may be, must always be cultivated: the Gospel is meant for everyone, but not by proselytism, no, it is meant for everyone, it is a leaven of new humanity in every place and time.”

The Pope warned against self-absorption “which never comes from the good spirit, is our hope for the whole Church: to beware of self-centredness, which always leads to defending the institution to the detriment of individuals, and which can also lead to justifying or covering up forms of abuse. … Instead, it is better to be courageous and to face problems with parrhesia and truth, always following the indications of the Church. … Self-celebration does no good service to the charism. No. Rather, it is a matter of welcoming each day with wonder – don’t forget wonder always indicates the presence of God – the freely-given gift you have received by meeting your ideal of life and, with God’s help, trying to correspond to it with faith, humility and courage, like the Virgin Mary after the Annunciation.”

He then went on to the second theme, emphasizing the importance of crises which are an opportunity to grow. A crisis “is a time of the Spirit, which arouses the need to update, without becoming discouraged in the face of human complexity and its contradictions. … It is the task of those responsible for governance, at all levels, to work to address in the best and most constructive way, communitarian and organizational crises; instead the spiritual crises of individuals, which involve the intimacy of the individual and the sphere of conscience, must be dealt with prudently by those who do not hold positions of governance, at all levels, within the Movement. … The intermingling of the sphere of governance and the sphere of conscience gives rise to abuses of power and the other abuses we have witnessed, once the cauldron of these unpleasant problems has been uncovered.”

To accomplish unity to which the Focolare is particularly called, the Pope indicates a twofold perspective: “With regard to acting outside the Movement and within it, I encourage you to be witnesses of closeness with fraternal love that overcomes every barrier and reaches every human condition. Overcome barriers, do not be afraid! It is the path of fraternal closeness, that transmits the presence of the Risen Christ to the men and women of our time, starting from the poor, the least, the discarded; working together with people of good will for the promotion of justice and peace.”  With regards to efforts within the Movement, he urged the Movement increasingly to promote synodality “so that all members, as depositories of the same charism, may be co-responsible for and participate in the life of the Work of Mary and its specific goals. Those who are responsible for governance are called to foster and implement transparent consultation not only within the governing bodies, but at all levels, by virtue of that logic of communion according to which all can place their gifts and opinions at the service of others, in truth and with freedom.”

And he concluded by reminding the Movement to remain, in imitation of the foundress Chiara Lubich, always listening to Christ’s cry of abandonment on the cross “which manifests the highest measure of love. The grace that comes from it is capable of arousing in us, weak and sinners as we are, generous and sometimes heroic responses; it is capable of transforming suffering and even tragedy into a source of light and hope for humanity. In this passing from death to life lies the heart of Christianity and also of your charism.”

The meeting with Pope Francis was opened by Maria Voce, outgoing President of the Focolare Movement, who presented the new President Margaret Karram: “We are grateful to the Holy Spirit for having chosen her,” she said, “in the joy of being able to entrust her now to your prayers and to your love, Holy Father, which will certainly be as deep and great as it has been for me during all these years.”

The newly-elected President, who was moved, confided to the Pope that she did not like the word President: “I am a daughter of the Church and I want to be at her service and that of everyone.” She expressed her gratitude for the Pope’s words and actions, which “constantly stimulate us to join the whole People of God in going out to embrace the pain of humanity and to work so that, in our common home, all may look upon and treat each other as brothers and sisters”. She thanked the Dicastery for the Laity, Family and Life for allowing this General Assembly to be conducted electronically. 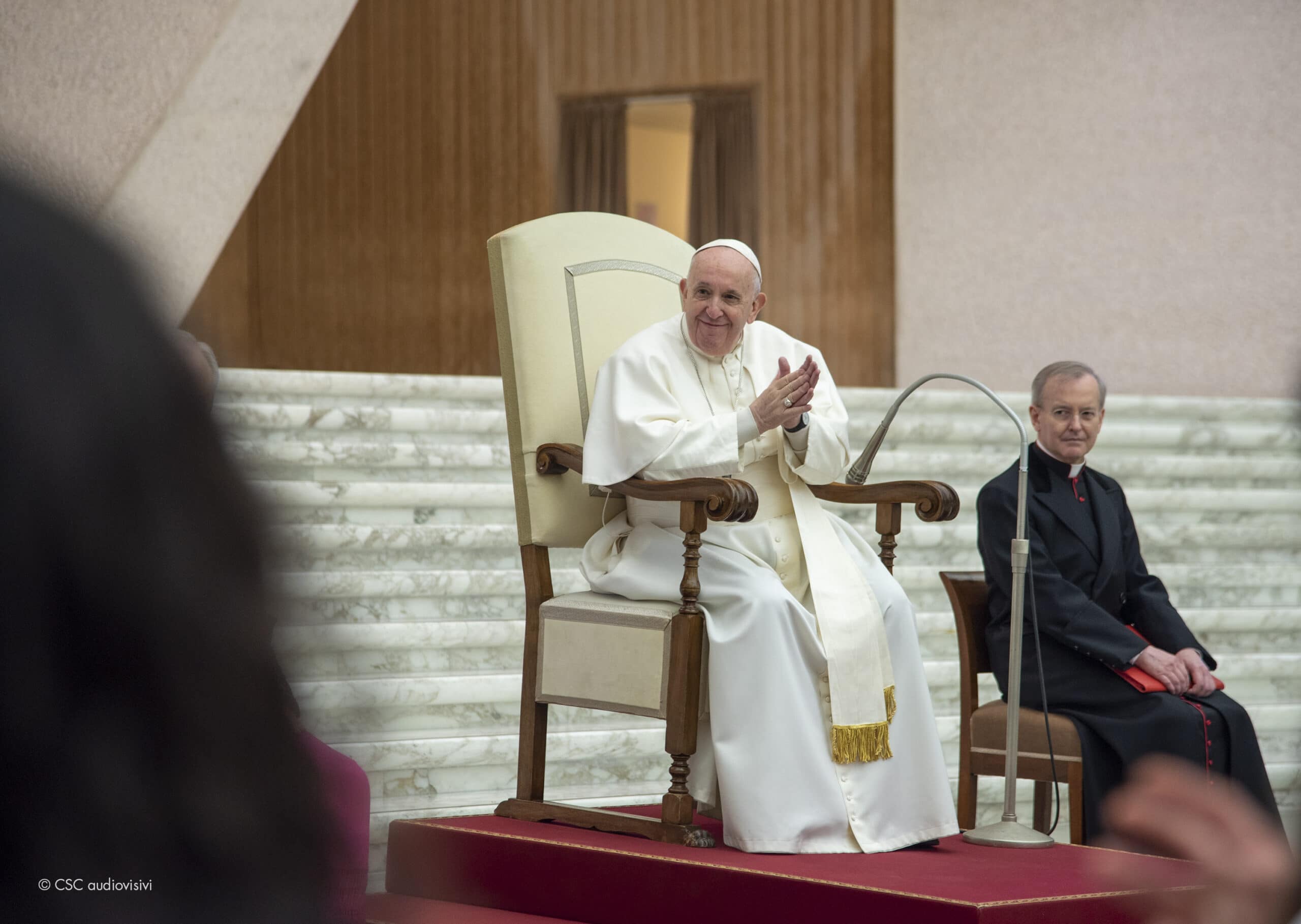